College Football week 5 had some nail-biting finishes and also gave us a good look at a lot of prospects. I want to talk at length about the Penn State vs Ohio State game from last Saturday. No game this season has contained more NFL draft prospects. The Ohio State defenders were a mix of good and bad. Dre’Mont Jones was good and Kendall Sheffield was bad, the real killer was letting Trace Mcsorley run around the field all game. I talk about Dwayne Haskins later in the article but overall I was not impressed with his performance. That brings me to Penn State who should have won this game by 20. I do not believe that Trace Mcsorley is a legitimate NFL prospect, but he is a damn good college football player. Mcsorley was by the far the best player on the field all night, he carried Penn State the whole game. The game came down to a fourth and five inside of Ohio State territory. Franklin sends in the play call and Ohio State calls timeout. After the timeout, Franklin then calls another play, but this time Penn State calls timeout. Franklin now has had three opportunities to call a play, and he goes with a zone read. Miles Sanders is a fine prospect but it just was not his night (2.7 yards a carry). Mcsorley had 7.0 yards a carry and 175 yards on the ground. You have to put the ball in his hands at this stage of the game but no Franklin goes with the zone read. After the game, Franklin said, “he would do whatever it takes to make Penn State a top contender”. He should start by looking in the mirror. In some actual draft-related news, Justin Herbert is officially my QB 1 for the season, he is far and away the best QB prospect in this class. The issue is trying to find a QB 2 because I have yet to find one I am comfortable with. Josh Rosen and Baker Mayfield both made their first starts and both of them got robbed of wins. Rosen was robbed by multiple dropped touchdowns and a missed game-winning field goal. Mayfield was robbed by the refs and The Raiders just getting lucky enough to win. The future looks bright for this batch of rookie QBs and I could not be more excited to watch them play the rest of the year.

Three Must watch games for week: 6

This game included two Quarterback prospects currently in my top 10. It also has a lot of good skill position players to watch on both sides of the ball. I’m starting to get tired of looking for a QB 2 and this game might help.

Players to watch for Missouri:

Players to watch for South Carolina:

We did Boston College last week as well, but this team has a good defense that will put Ryan Finley under some pressure. Finley is my current QB 2, however, I am not sold on anybody not named Justin Herbert.

Players to watch for Boston College:

I am not going to lie, this game is not going to be pretty. The reason I wanted to showcase this game is because West Virginia has two prospects high on my board. The other reason is that we have not talked about them or Will Grier yet this season. Auburn vs Mississippi State is a better game but we have covered those teams at length this year.

Players to watch for Kansas:

Players to watch for West Virginia:

Tyree Jackson: Jackson and his Buffalo teammates had a rough weekend suffering a big loss. Jackson, however, was a bright spot for the team. He made many NFL throws that will make scouts consider him late in day two of the draft.

Dwayne Haskins: Most will notice that Dwayne is not on the new top 10. My reason for this is simple, he has not produced enough tape at this point. For the people telling me he is QB 1, please watch the Penn State tape. He looked awful against them and got bailed out by how bad Penn State was down the stretch, and play calling.

Marquise Brown: Brown is known to some as “Hollywood” and that name fits. Brown is a flashy, fast, sure-handed wide receiver. He reminds me a lot of former Oklahoma standout Dede Westbrook (Jaguars). I am more of a fan of bigger WRs so Hollywood Brown will be lower on my list than most.

Ahmmon Richards: Richards has seen his stock fall for a number of reasons. The big one is injury, as he already missed multiple games again this year. When Richards has been on the field he has not shown anything special.

Jerry Tillery: Man has this guy been an absolute wrecking ball this season for the Irish. He killed the Stanford O-line on Saturday night and you guys should know how much I respect Stanford. D-Line is the deepest part of this class, so just being on this list means real talent.

Wyatt Ray: The Boston College vs Temple game ended up showcasing so much NFL talent. Among that showcase was Wyatt Ray. Ray disrupted the Temple passing game multiple times forcing some bad throws out of Anthony Russo. The rest of Rays tape looks just as impressive he might rise up the ranks as the season goes.

Mark Gilbert: Gilbert started the year at number five and as slowly worked his way down the board. Most of it is due to size and other guys at bigger schools outplaying him. I want to note though that I think Gilbert can still be a good NFL corner. This class is deep and if Gilbert can sell himself as a slot corner his stock will increase.

Jonathan Abram: Abram is a safety prospect that combines a lot of the skills the NFL is looking for into one player. Abram has great range on the backend and hits hard. He can be out of control sometimes but I think it is easier to teach someone to dial it back than teach them to dial it up. 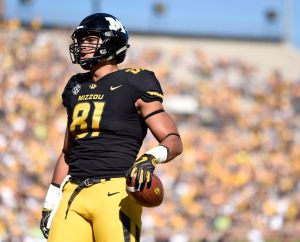 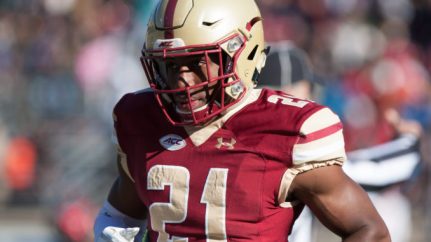 Just a kid from PA, also a part-time scout View all posts by dantecollinelli